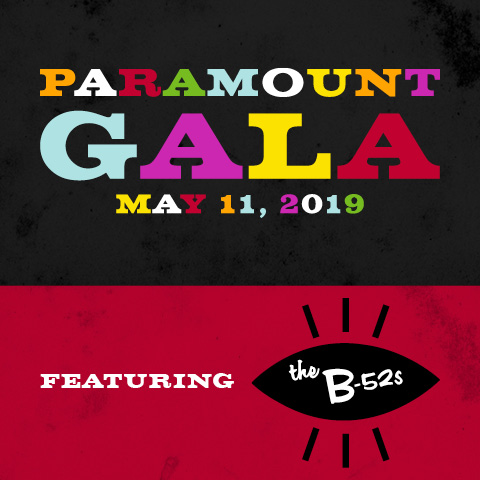 “I can think of no other band that is synonymous with the words party and good times than the B-52’s. Their infectious music layered with dance grooves galore, that frankly just makes your body move has been in high gear for the past 35 years.” – Yahoo! Voices

It is well known that the B-52s are The World’s Greatest Party Band. And nearly forty years and over twenty million albums into their career, there can be no doubt as to why they remain one of rock music’s most beloved and enduring bands. Any mystery concerning the band’s longevity and ongoing appeal is immediately solved when exposed to a B-52s concert experience. From groundbreaking songs like “Rock Lobster,” “Dance This Mess Around” and “Private Idaho“ to chart-topping hits like “Love Shack” and “Roam” and “Deadbeat Club” to their thrilling reemergence on the pop scene with their 2008 CD Funplex the B-52s’ unforgettable dance-rock tunes start a party every time their music begins.

Formed on an October night in 1976 following drinks at an Athens, GA, Chinese restaurant, the band played their first gig at a friend’s house on Valentine’s Day 1977. Naming themselves after Southern slang for exaggerated ‘bouffant” hairdos, the newly-christened B-52s (Fred Schneider, Kate Pierson, Keith Strickland, Cindy Wilson and Ricky Wilson) began weekend road trips to New York City for gigs at CBGB’s and a handful of other venues. Before long, their thrift store aesthetic and genre-defying songs were the talk of the post-punk underground. A record deal soon followed and their self-titled debut disc, produced by Chris Blackwell, sold more than 500,000 copies on the strength of their first singles, the garage rock party classic “Rock Lobster,” and “52 Girls.” The B-52s began to attract fans far beyond the punk clubs of the Lower East Side — galvanizing the pop world with their ‘stream-of-consciousness’ approach to songwriting and outrageous performance. They had clearly tapped into a growing audience for new music that was much larger than anyone could have anticipated. “We always appealed to people outside the mainstream,” says Kate Pierson, “and I think more people feel they’re outside the mainstream these days.”

With the release of their second studio effort, Wild Planet (1980), the B-52s and co-producer Rhett Davies proved their success was no fluke with hits with “Private Idaho,” “Give Me Back My Man” and “Strobe Light.” In just two albums, the B-52s created a lexicon of songs, styles, phrases and images which would set the standard for the development of the ‘alternative music scene’ for the next decade. The success of Mesopotamia, produced by David Byrne (1982), and Whammy! (1983) positioned the B-52s as MTV regulars as well as alternative radio staples. At the time of their greatest achievements, however, they suffered their greatest tragedy — the death of guitarist Ricky Wilson from AIDS. “He really had a vision…,” said sister Cindy Wilson. “He was one of the strongest elements of the B-52s from the beginning.” Ricky Wilson’s passing in 1985 came just after the sessions for Bouncing Off The Satellites (1986). The album, dedicated to Wilson, had taken nearly three years to complete but was worth the wait, serving up the fan favorites “Summer of Love” and “Wig.”

As a period of mourning, Keith, switching from drums to guitar, gradually resumed writing music for a new album. Working together on vocal melodies, lyrics and arrangements for the new tracks, Keith, Kate, Fred and Cindy re-emerged with the Don Was/Nile Rodgers co-produced Cosmic Thing (1989). The album proved to be the greatest commercial achievement for the group, and its success propelled the band to international superstars.

Cosmic Thing soared to the top of the Billboard Album chart, sold five million copies and yielded their first-ever Hot 10 hits — “Love Shack” and “Roam” and a Top 40 hit with “Deadbeat Club.” The B-52s advanced their reputation as the greatest party band on the planet to a whole new generation of music fans. They played to sold-out audience worldwide on a tour that would last more than 18 months, including an Earth Day gig before nearly 750,000 people in New York City’s Central Park.

Soon after, Cindy Wilson amicably departed. “I’d been a B-52 for a long time, and it just felt like time for a change,” said Cindy. Before long, Wilson had successfully completed her first solo project — a baby girl. Meanwhile, Kate collaborated with other artists, including Athens compatriots R.E.M., for whom she guest-starred on their 1991 album Out of Time. She also scored a hit with fellow CBGB’s alum Iggy Pop on his lovelorn duet “Candy.” Fred, meanwhile started work on a solo project, Just Fred (1996), with producer Steve Albini, his second solo project since the release of 1984’s Fred Schneider and the Shake Society.

As a trio, Fred, Keith and Kate re-enlisted the tag team of Was and Rodgers to produce the energetic Good Stuff (1992). With it’s popular title cut and concert favorite “Is That You Mo-Dean?,” Good Stuff is more than just a worthy follow-up to Cosmic Thing: the album stands as the group’s most overtly political album. “We’re out there to entertain people,” said Fred, “but it’s great to get people thinking and dancing at the same time.”

Reuniting permanently with Cindy, the B-52s wrote and recorded two new tracks that fit perfectly into Time Capsule, a 1998 stellar collection of hits. The first single from the Best Of collection, “Debbie” is a metaphorical tribute to band friend and supporter Debbie Harry and the whole CBGB’s scene of the late ’70s.

With the release of the two-disc collection Nude on the Moon: the B-52s Anthology (2002), the B-52s took much-deserved credit for a body of work that is unique, beloved and timeless in its own way. The B-52s influence cuts a wide path through much of so-called ‘modern rock’ — from the low-fi efforts of nouveau garage bands to the retro-hip of ultra-lounge, to the very core of dance music itself. “We just did our own thing, which was a combination of rock ‘n ‘roll, funk, and Fellini, and game show host, and corn, and mysticism,” says Fred. It is indeed all these things (and much more).

In 2008 the B-52s released their first new album in 16 years, the aptly titled Funplex. With its primal guitar hooks, driving drums and the B-52s’ unmistakable vocal style, Funplex is instantly recognizable as quintessential and contemporary B-52s. Newsweek Magazine declared, “Like a sonic shot of vitamin B12, the dance floor beats, fuzzy guitar riffs and happy, shiny lyrics keep the energy going.”

On February 18, 2011 the band joyfully celebrated its 34th anniversary with a triumphant return to their hometown of Athens, GA. Wig-wearing, boa-draped, glitter-covered fans came from near and far to celebrate this historic event, which saw the band deliver a sizzling 90 minute set that turned Athens’ Classic Center into a cosmic dancehall. The concert was released on a CD, DVD and Blu-ray entitled The B-52s With The Wild Crowd! Live in Athens, GA. In a review of the CD, Chuck Howard from Scripps Howard News Service proclaimed, “How The B-52’s have maintained their endearing vitality after all these years is a wonder, yet fans who hear “With the Wild Crowd!” will doubtless wish immortality on this uplifting band.”
In January 2013 Keith Strickland announced that he had made a decision to stop touring with the band. In a statement he said, “I will continue to be in The B-52s – I will just not tour. My barnstorming days have come to an end, but I wholeheartedly support Cindy, Fred and Kate’s decision to continue.”

In April 2015, the band rewarded their longtime fans with a rare gem: the release of a special early show from August 1979, pulled from deep within the Warner Brothers vault. They noted, “We opened for the Talking Heads at the Berklee Center in Boston just six weeks after our first record was released. We were a little scared of the audience so we kept our heads down and focused – and we danced like mad when there was a break! Ricky was so fierce on the guitar – so intense – it was all so raw and live.”

As they take their party-music revolution into the 21st century the B-52s show no signs of slowing down, serving up their own unique blend of music and showmanship to millions of fans around the world. 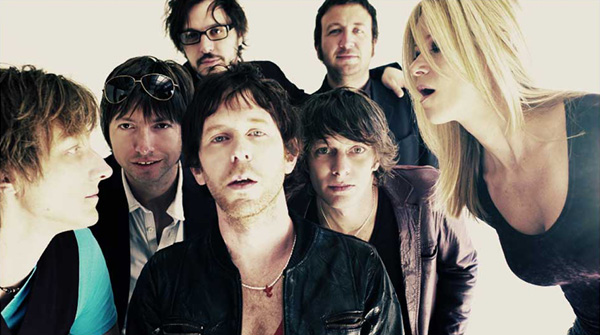 In a city known for its obsession with original music, SKYROCKET! is one of the most creative and inimitable cover bands ever to emerge from Austin, Texas. Or anywhere. It all started when a group of friends, some of Austin’s best-known songwriters and recording artists, discovered a common craze for the 1970s era. They resurrect the hits from many different decades and styles, fearlessly making the songs matter again. And they will MAKE you like it — with a dance party like no other. 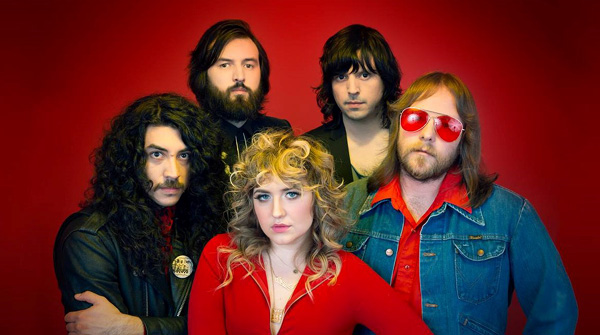 Austin band The Reputations has developed a well-crafted union of rock ‘n’ roll, old-school R&B, the hard-hitting guitar riffs of 70s glam rock, and even moments of San Francisco sunshine pop. An emulation of iconic 60s and 70s characteristics without the tongue-in-cheek kitsch that acolytes of the same eras often employ; The Reputations’ inspirations are genuinely embraced and passionately reinterpreted. 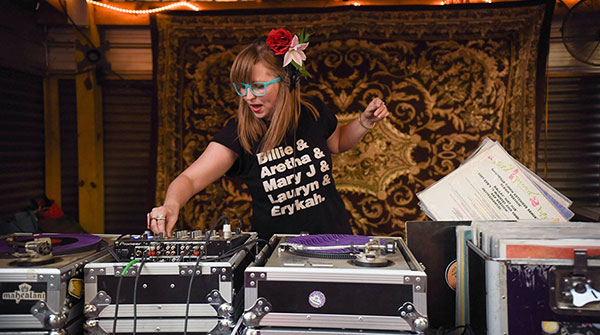