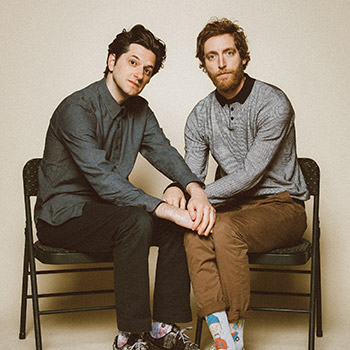 Thomas Middleditch and Ben Schwartz perform a series of completely improvised shows. The two started their improv careers in different cities 2 decades ago and have been performing together since 2008. Thomas Middleditch is known for his starring role as the lead character in Mike Judge’s critically acclaimed HBO series, SILICON VALLEY. Thomas’ performance garnered him a 2016 Emmy nomination for “Outstanding Lead Actor in a Comedy Series” along with three Critics’ Choice nominations for “Best Actor in a Comedy Series.” Middleditch recently starred in GODZILLA: KING OF THE MONSTERS, ZOMBIELAND: DOUBLETAP and has appeared in Martin Scorsese’s THE WOLF OF WALL STREET. Ben Schwartz is an Emmy Award winning writer, actor, and comedian. He’s starred in the television shows HOUSE OF LIES and PARKS AND RECREATION, and has appeared in the films THIS IS WHERE I LEAVE YOU, SONIC THE HEDGEHOG, and STANDING UP, FALLING DOWN, among others.