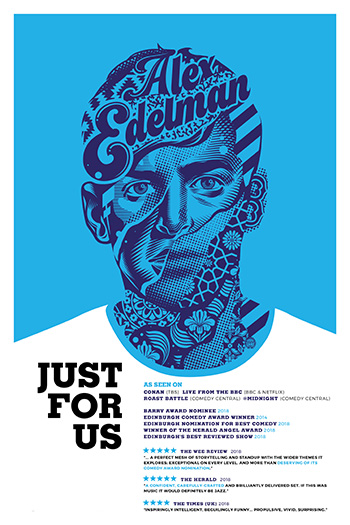 JUST FOR US – which centers on a meeting of neo-Nazis that Alex Edelman attended in New York – has cemented his reputation as a writer-performer of impressive ambition and technical skill.

In its premiere run at the Melbourne International Comedy Festival, it was nominated for a Barry Award for Best Show. In Edinburgh, it earned a Herald Angel Award, a nomination for Best Show, and superlative praise that made it the best reviewed comedy show at the Festival in a decade.

Besides Edinburgh and Melbourne, JUST FOR US has had several extended runs in London’s West End at the Soho Theatre, the prestigious comedy haunt where many of Edelman’s solo efforts have premiered. The show has also been presented at Just For Laughs in Montreal, at the Bell House for New York Comedy Festival, Off-Broadway at the Lucille Lortel Theater, and on a three-month, COVID-truncated UK tour.

SOME CRITICS ON ‘JUST FOR US’

“…One of the finest comedians in Edinburgh, full-stop. This is fine, funny, often charmingly self-deprecating writing, delivered with infectious confidence and exuberance, and building to a real cracker of a last line. Highly recommended.” TELEGRAPH ★★★★