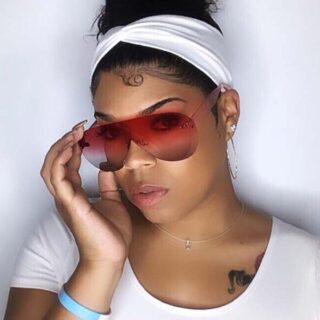 You may have seen comedian Pink Foxx touring around the country as part of the “Here 2 Help tour” with Deray Davis, or you could’ve seen her performing on the “Patton Oswalt Live: The Who’s Ready to Laugh Tour”, perhaps even before that while opening for Russel Peters at San Diego’s American Comedy Company. Possibly you’ve casually spotted her working her material at The World Famous Comedy Store, Melrose Improv or The Laugh Factory in Hollywood, CA. She’s also made an appearance on Revolt Tv’s Blocked, and has written for shows like Here TV’s Slay Model search. No matter where or when you’ve seen her, one thing is certain, Foxx is funny and her perspective is one of a kind! Born into a family of entertainers, by age 7 she had already auditioned for her first film, performed on a live stage, & worked as a vocalist in the music industry. Influenced by such talents as Redd Foxx, Eddie Murphy, Richard Pryor, & Martin Lawrence, Foxx fell in love with comedy, and shortly after college she began developing a career in stand-up. Pink’s comedy is raw, authentic and hilarious as she tells stories of her teenage celebrity encounters, her family life, mid 90’s east coast upbringing, & dating throughout her growth and development as a transgender woman of color.