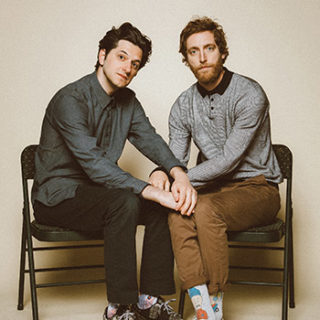 Schwartz can be seen alongside Thomas Middleditch in their Netflix specials, MIDDLEDITCH & SCHWARTZ. The specials are based on their completely improvised two person show that they took on tour through early 2020. During this tour, the two played Carnegie Hall, Chicago Theatre and sold out theaters all across the country.

Schwartz can be seen starring in Netflix’s SPACE FORCE, the comedy series that follows the people tasked with creating Space Force, a new branch of the U.S. military. Created by Greg Daniels and Steve Carrell, Schwartz stars alongside Carrell, Noah Emmerich and John Malkovich in the new original comedy which launched in May of 2020. He also stars in the Disney+ original film FLORA AND ULYSSES and lends his voice to the Paramount Animation and WWE-produced animated film, RUMBLE starring Will Arnett, Terry Crews and Tony Danza set to release in 2021.

Most recently, Schwartz voiced the title character in Jeff Fowler’s highly successful live action/animation hybrid film SONIC THE HEDGEHOG, based on the classic Sega video game. Paramount released the film on February 14, 2020 and it has since become the highest domestic grossing video game adaptation of all-time with $146 million and a worldwide gross of $306.7 million.

On the big screen, Thomas recently joined the casts of GODZILLA: KING OF THE MONSTERS opposite Sally Hawkins and Kyle Chandler, and REPLICAS opposite Keanu Reeves. He was also in JOSHY, which premiered at the 2016 Sundance Film Festival, and horror comedy THE FINAL GIRLS. He also lent his voice to the DreamWorks animated feature, CAPTAIN UNDERPANTS, along with Ed Helms, Nick Kroll, and Kevin Hart.

In 2013, Thomas appeared in Martin Scorsese’s Oscar nominated film, THE WOLF OF WALL STREET opposite Leonardo DiCaprio and Jonah Hill. He also appeared in Jay Roach’s THE CAMPAIGN opposite Will Ferrell and Zach Galifianakis.