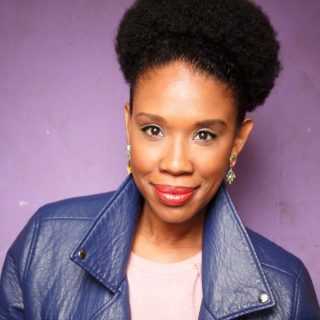 JOYELLE NICOLE JOHNSON is a comedian and writer who brings joy to the stage. Joyelle made her network TV debut on Late Night with Seth Meyers and more recently performed on The Tonight Show with Jimmy Fallon twice in one year. Her first stand-up special LOVE JOY is available on Peacock. It was nominated for a Critics Choice Award, and is executive produced by Jimmy Fallon. She is currently a staff writer for HBO’s Pause with Sam Jay and has done punchup for Broad City and Abbi and Ilana’s animated Comedy Central pilot Mall Town. She co-wrote a digital series for Illuminative, which she also stars in. Her debut comedy album YELL JOY! was released on Juneteenth 2021. She was the warm up comic for Hasan Minhaj’s talk show Patriot Act on Netflix and the permanent guest host for the Sirius XM radio show Godfrey Complex. She has performed on Wyatt Cenac’s Night Train for SeeSo, This Week at the Comedy Cellar and Comics to Watch for Comedy Central, LaffMob for TruTV, was a panelist on Refinery 29/Facebook Watch’s After After Party and can be seen in HBO’s Crashing and the upcoming season of Search Party. She was selected for the 2018 FOX Comedy showcase, was a finalist in NBC’s Stand Up For Diversity Showcase and has performed at festivals like SF Sketchfest, Bonnaroo, The New York Comedy Festival and Bumbershoot. Vulture and NY Magazine named her one of the “comedians you should and will know in 2020”.