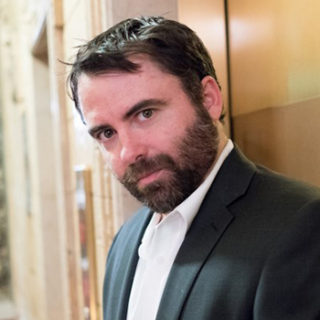 After abandoning the professional jump rope circuit with a torn ACL and a broken ego, Doug decided to grab a mic and hit the stage in 2003. Audiences in Austin, Texas were soon treated to an unprecedented brand of rapid-fire, topic-jumping humor that gets laughs where others take breaths.

Just a few years later, he was voted “Funniest Person in Austin” at the Capitol City Comedy Club by a panel of judges comprised of Comedy Central, “The Tonight Show,” and “Montreal Comedy Festival” representatives. Soon after he made it to the semi-finals of NBC’S “Last Comic Standing Season 4” and later appeared again on “Last Comic Standing Season 6” and Comedy Central’s “Live at Gotham.” The former co-host of Sirius XM’s “Naked and Fearless” has also performed at Comedy Central’s “South Beach Comedy Festival,” “Moontower Comedy Festival” and at SXSW for the “Doug Benson Interruption.” Doug was a fan favorite and regular at “Fun Fun Fun Fest” performing alongside acts such as Henry Rollins, David Cross, and Slayer. If he’s not headlining a venue near you, you can catch him as a regular opener for Tom Segura or Dan Cummins across the country. Doug was also a guest on Your Mom’s House with Tom and Christina Pazsitzky and performs all over Los Angeles where he now calls home. Doug released his debut album, Fart Safari, on Stand Up! Records in 2015, and the follow-up albums Fart Safari 2: Fart Harder, Fart Safari 3: Fart Hard With A Vengeance, and I’m Worried About Me dropped in 2018, 2020, and 2021. He currently co-hosts Wide World of Dougs with Doug Benson. He also hosts his own podcast, EarFinger, and has a Nicolas Cage-themed podcast called Nicolas Cage: National Pleasure dropping soon.

Doug, never one to rest between punch lines, has been steadfastly writing and laughing his way up the creative chain-of-command. Expect Doug Mellard to continue delivering laughs as he moves his career forward to larger horizons. His comedic energy is infectious, and he is eager to spread it as whole-heartedly as he feels it.