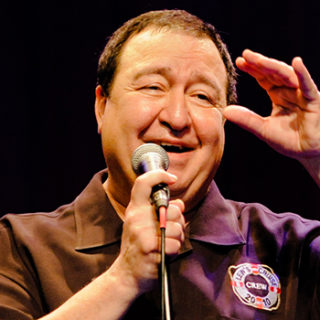 Dom Irrera… or “The Dominator” as he is known in comedy circles, is an award winning American standup comedian and actor born and raised in Philadelphia. He possesses the natural talent to make almost any crowd laugh until it hurts with his insane stories, jokes and characters. His television appearances include The Tonight Show with Jimmy Fallon, Late Show with David Letterman, Late Late Show with Craig Ferguson, Tosh.0, Oprah ,”Seinfeld”, “Everybody Loves Raymond” and The View. He has starred in his own Comedy Central Showtime, and HBO specials.

Voted one of Comedy Central’s Best Comedians of all time , Dom currently hosts his own podcast “Live from The Laugh Factory with Dom Irrera” where he chats and riffs with other comedy luminaries.
He has performed more often at the prestigious Just For Laughs Festival in Montreal and the Cats Laugh Festival in Killkenny Ireland, than any other American comedian. Other festival appearances include The Moontower Comedy Festival in Austin and the Edinburgh Fringe.