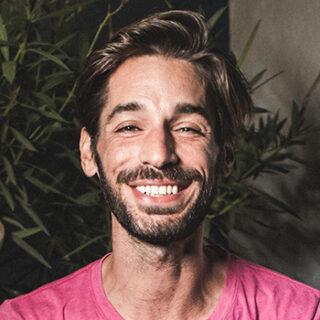 In 2021, Daniel released his first 1-hour comedy special Hoe’s Parade: Live at the Rose Bowl (Tribeca), & was 1 of 10 handpicked comedians to perform at WarnerMedia’s first ever Virtual Comedy Showcase. Daniel is currently featuring for Margaret Cho on her nationwide tour, and produces & co-hosts HAGS in Los Angeles.

Known for a fast-paced, wide-ranging set, Daniel famously garnered international attention cracking gay jokes with President Barack Obama, was a feature performer at SXSW (2021), Moontower Comedy Fest (2021), & JFL Northwest (2020), he was selected as Comedy Central’s UP NEXT Comedians (2018), made Vulture’s list of Comedians You Should and Will Know, and Daniel was a FINALIST for STAND UP NBC.

Daniel’s comedy has been featured on Unprotected Sets (PushIt Productions/Epix), Comedy Central Stand Up (Comedy Central), Inside Joke With Asif Ali (Amazon), Coming To The Stage (Hulu), Mortified Guide (Netflix) and Out On Stage: The Movie! (Amazon Prime).