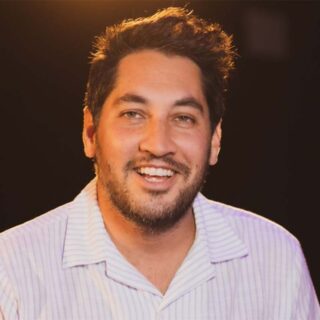 Carmen Christopher is a Brooklyn-based comedian, writer, and actor, who currently writes on UNT. CRAIG ROBINSON/DAN GOOR/LUKE DEL TREDICI PROJECT for Peacock as a Story Editor. He previously wrote on A24/Showtime’s upcoming series THE CURSE, created by The Safdie Brothers and Nathan Fielder and to star Nathan Fielder and Emma Stone. He can be seen in his original special CARMEN CHRISTOPHER: STREET SPECIAL, airing now on Peacock.

Carmen can also be seen on JOE PERA TALKS WITH YOU (Adult Swim), SUNNYSIDE (NBC), HIGH MAINTENANCE (HBO) and in the Netflix feature OTHERHOOD opposite Angela Bassett. He can next been seen in the Disney+ feature RESCUE RANGERS, directed by Akiva Schaffer. Carmen wrote and appeared on THE CHRIS GETHARD SHOW for truTV and he created and starred in digital content for IFC, Comedy Central, and Super Deluxe. In 2017, he was named one of Comedy Central’s “Comics to Watch” and he started at Chicago’s famed IMPROV OLYMPIC, SECOND CITY, and ANNOYANCE THEATER.