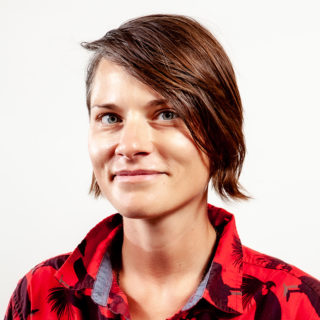 True to her name, native Texan Arielle Isaac Norman is a couth, gender-flexing, blue-eyed five-star lesbian strewing eccentrically reasonable punchlines on the Austin comedy scene and beyond since 2014. Crass and contemplative, Arielle’s act famously expands and contracts to charm whatever space she’s in, whether it’s comedy festivals, underground speakeasies, or her own BackYard Sluts show. Arielle is creator and co-host of the cult favorite Gender Fluids Podcast and M.C. of her beloved interactive showcase, Off Script, where audience members are rewarded for quality heckles. When not snuggling her four pound chihuahua Kooper, her Amazonian partner Kasey, or any of her other favorite shapes and lovers, Arielle can be found solving the culture war by interviewing lefties and righties, tops and bottoms, fluids and squares for her current passion project, the Politically Non-binary Podcast.