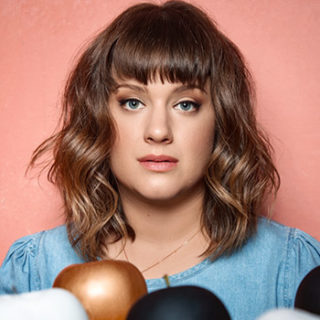 Anna joined the writing staff of SATURDAY NIGHT LIVE in 2016 and was named Head Writer in 2020. She’s the co-author of HOW TO WIN AT FEMINISM (HarperCollins, 2016) and HOW MAY WE HATE YOU (Potter Style, 2016). The latter, which was based on Anna’s experiences working as a concierge at a hotel in Times Square, was optioned by ABC and turned into a pilot, starring Kat Dennings and directed by Will Gluck. Anna staffed on the TBS series, MIRACLE WORKERS, starring Daniel Radcliffe and Steve Buscemi and can be seen as a guest star in the current season. She also wrote on Peacock’s upcoming series, GILRS5EVA, produced by Tina Fey. She’s currently developing her satirical animated half-hour WILD WILD PETEY with Greg Daniels and Mike Judge for Freeform with SCHITT’S CREEK’s Annie Murphy attached to star.

As a stand-up, Anna was a 2018 JFL New Face and had a terrific run of her one-woman show, OKAY!! GET HOME SAFE at the Edinburgh Fringe Festival. Anna’s late night debut on JAMES CORDEN can be seen below.