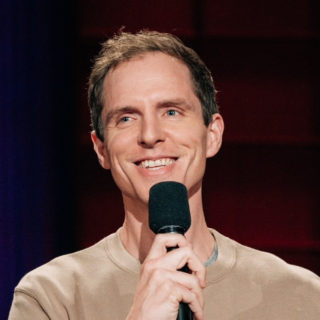 Andy Haynes is a comic, writer and performer from Seattle, WA. His stand-up credits include Late Night with Jimmy Fallon, CONAN, The Pete Holmes Show, Comedy Central’s Roast Battle, The Late Late Show with James Corden and This Week at the Comedy Cellar. His Comedy Central half hour was released in 2013 with his debut album ‘GREATEST HITS’ being released in 2014.

On screen, Andy has been featured in Another Period (Comedy Central), Goatface: A Comedy Special (Comedy Central), Adam Ruins Everything (TruTV) and Loosely Exactly with Nicole Byer (MTV). He was also the creator and star of ‘AFTER SHELDON WITH ANDY HAYNES’ on JASH.

He served as the head writer for the Snapchat series Hot Takes with Brandon Wardell before going on to write and create the animated show ‘THE CHAMPIONS’ for the Bleacher Report which is going into its third season. He co-hosts his hugely popular podcast ‘FIND YOUR BEACH’ with his wife, and fellow comedian, Rosebud Baker.

Andy is a paid regular at both the Comedy Store in LA and the Comedy Cellar in NYC.