Creating a Gretel for Modern Audiences 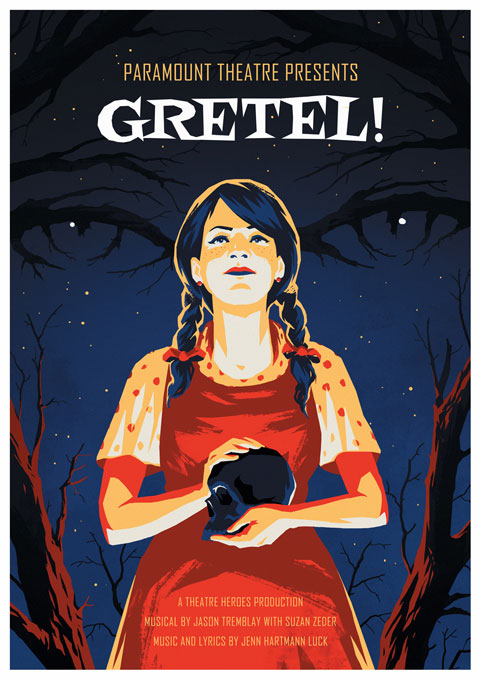 What appeals to you about the story of Gretel? Why is this a story that today’s young audience should experience?

JENN: I think it is so important for young people to know that they have the strength and the power within themselves to overcome all the challenges in their lives. I also love the connection between Gretel and her mother. Maybe that’s just because I am a mother myself now, but I love the way this story celebrates womanhood and our connection to our past.  Women are strong, they have been strong throughout the ages, and I’m excited for the young audiences of today being exposed to more stories celebrating the strength and power of girls and women.

NOEL: We want to tell an adventure from a girl’s perspective; to champion the determination, perseverance, and voice of girls; to find a girl’s adventure that boys also get excited about.

SUZAN: Audiences old and young need stories about survivors. Now, perhaps more than ever before, we all need to know that kindness and courage can overcome fear, loneliness and loss. On the surface Gretel! is the story about a fairy-tale heroine facing one of the greatest witches in legend or lore, but any child who has ever felt the loss of a loved one, felt abandoned or alone, or faced the fear of someone or something much more powerful will identify with Gretel. I also love the humor in this story. On her journey Gretel is helped by a magic doll, a mysterious knight, a garrulous Goose and ultimately by the very witch who haunts her dreams.

Why do we revisit myths and fairy tales? Why are we drawn to them?

JENN: I think we love connecting with characters and situations we are familiar with. I also believe there is something to the fact that these are the stories that our ancestors have been reading and retelling for ages.

NOEL: There is something special about fairy tales. Fairy tales allow our imaginations to burst wide open and invite in more possibilities. Fairy tales have everything that a great story wants: humor, tragedy, suspense, sadness, and joy.

SUZAN: Most fairy tales are about a young powerless person surviving seemingly impossible odds: they bring us comfort and hope. They speak to different ages in different ways. Originally these tales were not created for children, but for families and communities, old and young gathered around the hearth. A grandmother experiences the story differently than her grandchild, but no less powerfully. Even today, many of us remember fairy tales from our own childhoods, whether we were read them, saw them in films and animated features, or experienced them in live theatre; they are a part of our DNA. From my own childhood I remember being terrified at the witch in Snow White, and thrilled by the vision of Sleeping Beauty’s castle swallowed up by impenetrable thorns. These visions are as fresh in my mind as they were more than 65 years ago! I think we are drawn to these stories because they live IN us.

The musical seems to borrow more heavily from Vasilisa the Beautiful rather than Hansel and Gretel. How was that decision made?

NOEL: That decision came originally from Jason Tremblay in his first draft of this story and Suzan followed his breadcrumbs.

JENN: When Jason began the writing the show, I think he was simply more drawn to Vasilisa because it was different. He had once referenced this story as being an “origin” story of Gretel. When Jason passed away, Suzan wanted to honor where Jason had started and thus we made the decision to lean in a bit more on Vasilisa and then let our Gretel tell us where she wanted to go.  It’s been a very organic process that way and we keep saying “Gretel gets what she wants” – it’s true.

SUZAN: Vasilisa is a less well-known tale and I for one am delighted that Jason used it as his primary touchstone. In many ways it is a more complicated tale than Hansel and Gretel. The witch Baba Yaga is not simply an evil figure, as is the witch in Hansel and Gretel. Baba Yaga is also a healer, and sage. She has the dimensionality that a single dimensional evil witch does not. The twists that we have put into the play intensify this complexity and the big surprise at the end, something that Jason glimpsed but had not written before he died, deepens the story further. We have also had a grand time putting echoes of many other fairy tales into the piece – – the name guessing from Rumpelstiltskin, the drinking of a poison potion from Peter Pan, and a magical transformation, straight out of Pinocchio. This play pays homage to a world of fairy tales.

This piece didn’t start off as a musical, but it has emerged as one. Why is music important to the story?

JENN: Jason always knew music was going to be an important part of the storytelling, but I think his original vision was more of an underscoring. Honestly, it was my instinct after reading his first draft that just told me Gretel needed to sing. I was blown away after reading the first draft – I loved it so much – but I felt I had something to offer Gretel! I asked Jason if I could write a song and he was elated by the idea. I had him walk me through the moments in the show that packed the most heat for him and I set to writing a song for Gretel to sing. That’s when “Survive” was born. I sent him this raw recording, no music at all – just me singing the melody. He wrote back to me immediately that he loved it. Every so often I’d get messages form him about the song, including once when he was in the hospital and he told me “I keep listening to the song over and over – it’s going to get me out of the hospital this week.” That was very powerful for me and while we never had the time to write another song together before he passed, I feel very confidently that he would be pleased with where the music has taken the piece.

NOEL: Song and fairy tale pair perfectly. The music allows us to make moments that are larger than life, like a fairy tale.

SUZAN: Music in this piece is a whole other language. It provides color and texture, it brings humor, it underscores intensity and release. It also serves as an emotional barometer. As we are carried into Gretel’s feelings of loss and abandonment our own emotions are touched in songs like “My Child” and “Listen.” We experience both humor and a tingle of fear in “Baba Yaga.” I cannot conceive of this show without Jenn’s music. It is actually MORE important than the words because it does so much so quickly.

What do you hope our young audience members will take away after experiencing Gretel!?

SUZAN: I hope they will have a theatrical experience that will make them laugh, maybe cry, and keep them on the edge of their seats. I also hope it will make people of ALL ages think and question their own perceptions about prejudice and assumptions. In Gretel! things are rarely what they appear to be…they are so much more.

NOEL: Girls can be the lead of an inspiring adventure.

JENN: I just want young audiences and their families to be cheering for Gretel and lifting her up as she moves into her own power. Hopefully they will see a bit of themselves in her.

This is the Gretel! world premiere; where does it go from here?

JENN: Gretel! is having her launch into the world at the Paramount. What a special opportunity. Not just for all of us working on the piece, but for Jason’s legacy. The fact that his memorial was on this stage and now his last piece will have its first performance here is really special.

NOEL: Theatre Heroes is planning a Texas Tour of Gretel! in 2019/20 in preparation for a National Tour during the 2020/21 season.

JENN: That means young people all over the country will get the chance to see these amazing performers and artists in their hometowns and cities. We are hoping to publish the script in the coming years and make it available for other companies to produce. While this is so exciting for all of us creating the work – it is really an incredible way to see this piece as a legacy for Jason Tremblay, his Wife Sheila, and their son, Oliver.

SUZAN: If we can make this piece accessible to many different kinds of productions without any loss of quality, then it will truly have a life of its own and will become the legacy that Jason hoped it could be for his family and for the field of theatre for young people. We hope in this way to live up to what is said in the very first scene…“The story will survive forever. The story will outlive the teller. But only…if it lives in YOU!”