Citizens at Last is a documentary film that tells the story of the grit, persistence, and tactical smarts of the Texas women—white, Black and Latina—who organized, demonstrated, and won the vote for women. Citizens at Last follows the early days of organizing, explores the strategic role Texas suffragists played in the national movement, and exposes the pro-Jim Crow policies of the anti-suffragists who stood in their way. To accompany the documentary, students will have access to a Q&A conversation with the team that created it.
REGISTER NOW 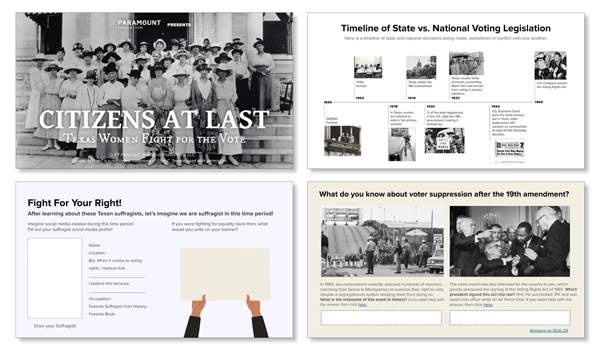 Experience the Paramount like never before, getting up close to the ornate proscenium, going backstage, and into the film booth.
Watch a preview

Citizens at Last® is a registered trademark of Ellen C. Temple, used with permission.