Home » About Us » Centennial Celebration

We are delighted with the success of the September 23rd blade relighting event that capped off a year of Centennial Celebrations! Thank you to every one of you for the support, time, energy and funds you have dedicated to this important year in the Paramount Theatre’s rich history.

A special thank you goes out to our Centennial Stars Committee who have helped us remain vibrant and in the spotlight. Each one has graced our stages or screens, and have been great friends to the Paramount over the years.

In January, we launched the Paramount’s 100th Anniversary by announcing our Centennial Celebration events – from free movie nights tied to our history, relighting our long-lost blade, to parties, Moontower and more. Houdini even made an appearance, surrounded by vaudevillian performers, jugglers, stilt walkers, magicians and over 300 guests! The Honorable Mayor Steve Adler decreed October 11th as “Paramount Theatre Day” in Austin, and recognized the theatre for its lasting presence on Congress Avenue.

Watch the video below to experience the magic of kick-off night: 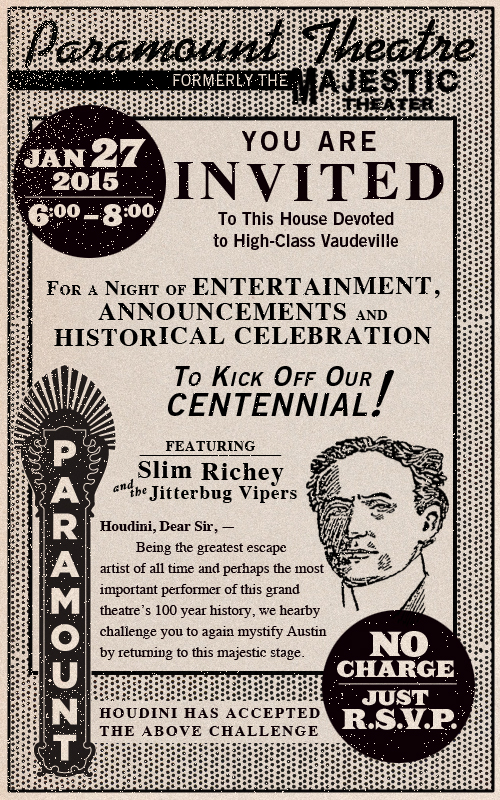 Erik Stanley and Cate Barrett were the winners of the 9th Annual Break-A-Leg 5K. Join us next Valentine’s Day when we run again as the official 5K of the Austin Marathon and Half Marathon presented by Freescale.

Our annual Advisory Council party was held this year at the beautiful home of Amanda and Brad Nelsen.
Special guests included, Glee‘s Jane Lynch and The Office‘s Kate Flannery.

As a tribute to the Paramount’s rich cinematic history, the theatre hosted four free-to-the-public film screenings during its 100th-birthday year. More than just a remembrance of the films and filmmakers that have graced the Paramount’s screen and stage over the decades, these four special evenings served as the theatre’s gift to all the Austin movie lovers who continue to support the theatre each and every year. From classic Hollywood greats to contemporary Austin filmmakers, these four films encapsulated both the past and present of the Paramount’s love affair with the movies.

The Marx Bros’ A NIGHT AT THE OPERA

With over 250 in attendance, April Fool’s night became a tribute to the many famous acts who passed through the Paramount during its vaudeville days, including an actual live performance by the Marx Brothers.

In memory of Katharine Hepburn’s visit to the Paramount to perform live in the stage version. We had 500 patrons join us for the film which was the same night as co-star, Jimmy Stewart’s birthday. 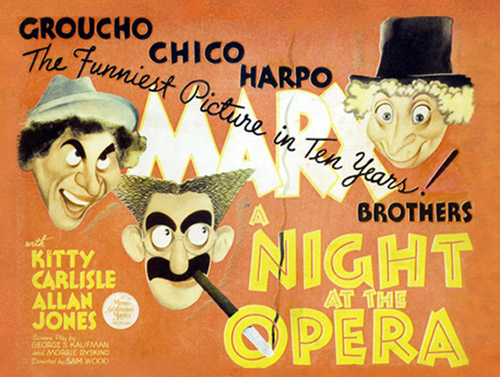 Austin film director, Richard Linklater visited the theater to discuss his film, Me and Orson Welles, and recount his own memories of the Paramount over the years, with 400 in attendance.

Filmmaker Robert Rodriguez brought his iconic film From Dusk Till Dawn roaring back into the Paramount Theatre, a reminder to the 400+ movie lovers in attendance of the many times his films have graced that screen over the years. 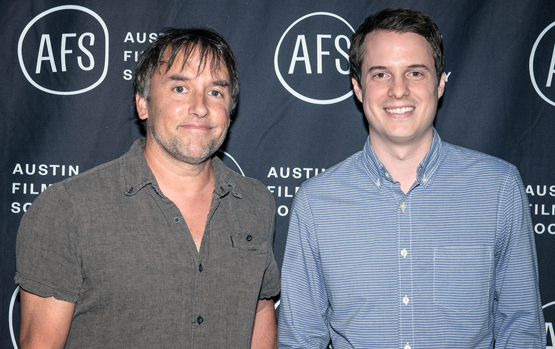 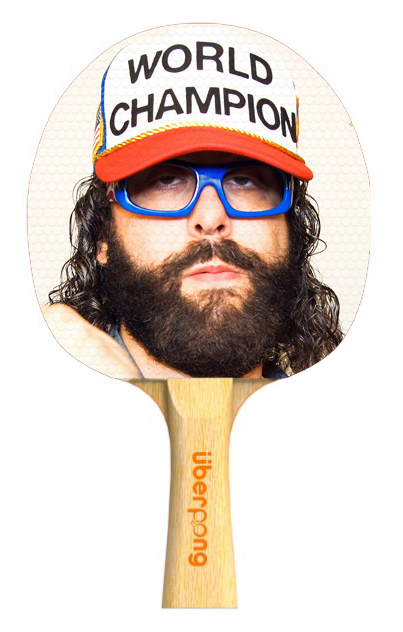 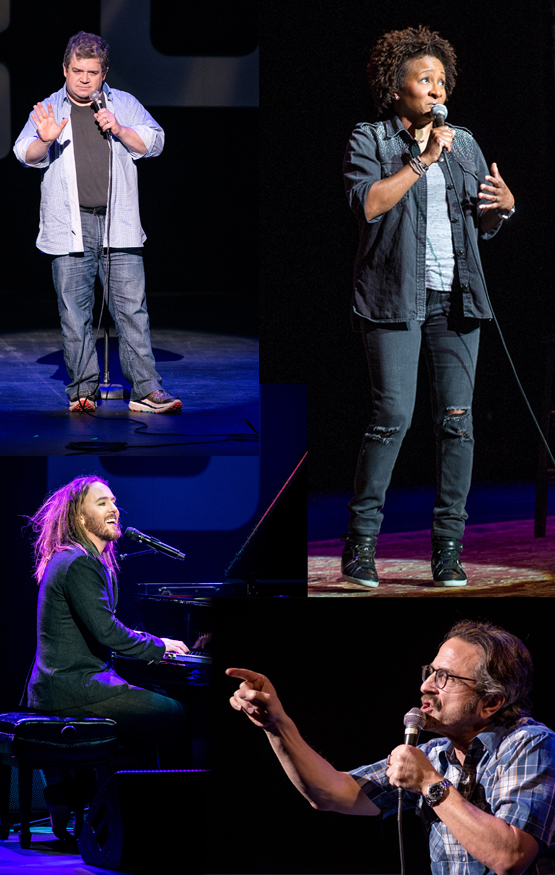 The Centennial Gala welcomed Lyle Lovett with Patty Griffin, Allen Toussaint and Warren Hood. It was a record-breaking night, bringing in over $1.2M in revenue. The music, setting and celebration were a sight to see, including an unveiling of a new star on Congress Avenue honoring Lyle Lovett. It was truly an evening from another era as guests arrived in period costumes and embraced the once-in-a-lifetime celebration. 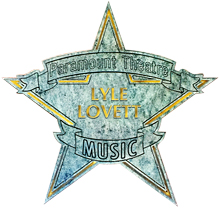 The Paramount Summer Film Series celebrated its own landmark year in 2015, marking the 40th anniversary of this long-standing Austin tradition. Though cinemas across the country continue to move toward digital exhibition, the Paramount continues to support the preservation of our cinema history in its original format. Of the nearly 110 movies screened during the summer of 2015, more than half were screened on 35mm and 70mm film. And what a collection of movies! In addition to traditional favorites like CASABLANCA, LAWRENCE OF ARABIA, and GONE WITH THE WIND, the 2015 series included films from 1919 all the way to 2010, featuring highlights like: 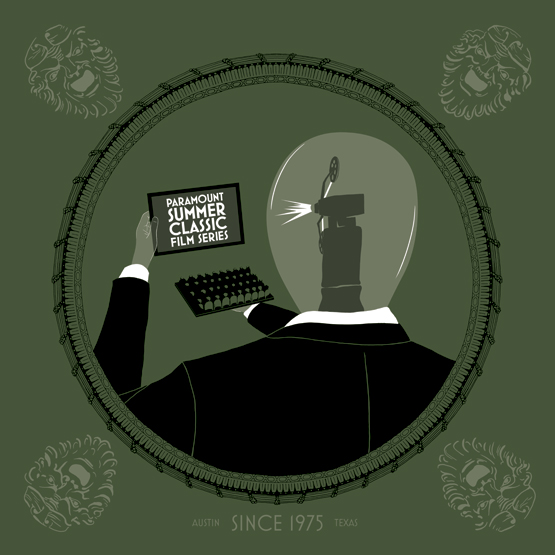 The Blade Relighting Ceremony was magical and a fitting toast to the year. Thank you to each and every one of you for the support, time, energy and funds you have dedicated to this important year for the Paramount Theatre! Seeing longtime volunteer usher, Flo Henderson, flip the switch on the new blade made for an emotional and historic night!

In addition, we held six private parties serving nearly 400 people, a public street event with over 1,000 attendees, and followed it all up with a sold-out Patty Griffin concert.

Learn more about the Paramount blade 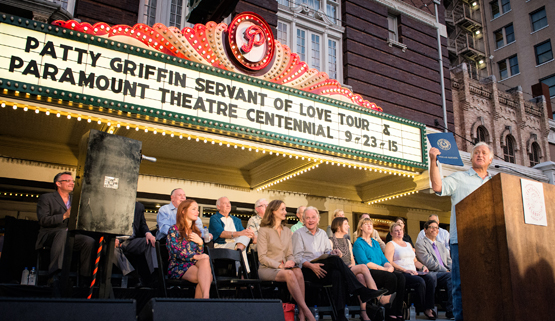 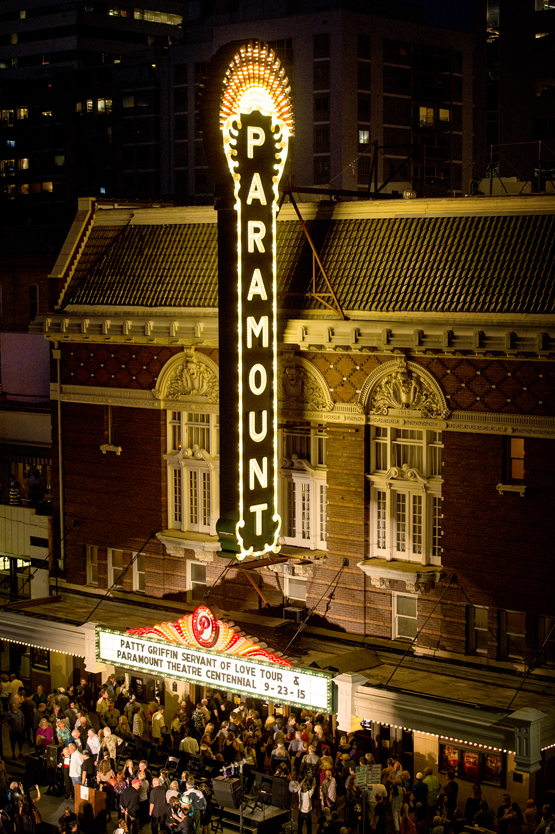 A Century of Theatre

We encourage you to take time and visit the exclusive, history-focused website www.paramountaustin.org. Thank you to Proof Advertising for their due diligence in uncovering many unknown stories, and launching this beautiful site dedicated to the various eras, renovations and reinventions of the Paramount’s past. Pro Tip: make sure your sound is on to enjoy the full experience of our Centennial Website.

For more history, visit our Centennial site at www.paramountaustin.org. You can also click here to download a PDF of our 100-year brochure. Download a bundle of a high resolution theatre photos. For any other inquiries, please email info@austintheatre.org.