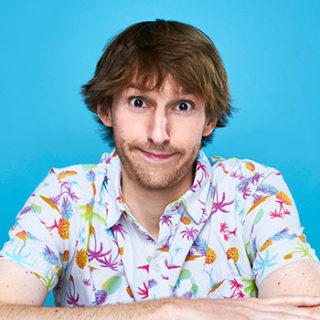 Jeremiah Watkins is heralded as the comedian for making Judd Apatow fall in love with comedy again, and that’s a direct quote from Judd himself! You may know him as 1/3 of The Wave from Comedy Central’s Roast Battle, as Moshpit (a roadie/hypeman) in The Comedy Jam, or as 1/2 of the musical comedy super-duo Regan and Watkins during Kill Tony, the #1 Live Podcast in the world. He performs stand-up at all of the major clubs in Los Angeles throughout the week and became a Paid Regular in 2016 at The World Famous Comedy Store, getting his name painted on their prestigious wall in 2017.

The Comedy Store is also the home for his wildly popular live show Stand-Up On The Spot, which is returning to Montreal’s Just For Laughs Comedy Festival for the second year in a row, and was named by GQ Magazine as one of the “5 Funniest Nights in America.” Since moving to LA from Kansas, he has established himself as one of the most physical stand-up comedians in Los Angeles with his high energy and off-the-cuff style. He placed 2nd in the 2015 Big Sky Comedy Festival, and has performed at Just for Laughs, Bonnaroo, Outside Lands, TBS’s New York Comedy Festival, South by Southwest, Riot LA, Moontower, and many other festivals throughout the country.

Other film and tv appearances include: Jimmy Kimmel Live, Comedy Central’s The Comedy Jam, Big Jay Oakerson’s What’s Your F@%king Deal?! on Seeso, star of the the film i-Lived (available on HULU), supporting in the film The Bet (available on Prime), and he can also be seen in the Season 2 finale of HBO’s Crashing with Pete Holmes. He is a graduate of the Second City, has trained at The Groundlings, and has performed improv all over Los Angeles. No matter what size the audience, Jeremiah Watkins guarantees a memorable show experience like you’ve never seen before.